On the morning of Tuesday 30th January 2018 , Frances Grier will set off by bike from London for the Gobi Desert in Mongolia. Over six months she will cover 15,000km to traverse eighteen countries and cross two continents as she follows the ancient Silk Road. How will she get there? By Beeline, of course.

The route as it stands

Frances Grier is an intrepid adventurer. So intrepid that she, like Bear Grylls, has adopted a pseudonym - Penelope McGregor.

Well, we asked her what she would call herself if she, like Bear, were to go by another name and that was it. Or else, she will compromise and call her beautiful new bike Penelope. We'll keep you updated.

At 30 years old she has already has the stamps of 30 different countries in her passport and has done everything from backpacking around South America for five months to scaling Russia's Mount Elbrus, and eating chicken tails in Japan. After the toughest climb she has ever tackled, Frances reaches 5642m to summit Elbrus

The best place she's been to so far? Myanmar for it's beautiful temples and beautifully friendly people. The worst was the dodgy end of Palermo, Sicily. Frances and her brother accidentally crashed a wedding and then grew increasingly more convinced that they were being tracked by the local mafia. That, the bedbugs in their hostel room, and the tuneless karaoke that drifted up from the bar below ensured a sleepless night.

With summits of several 5000m plus peaks to her name and countless cycling centuries, Frances has already conquered huge physical feats. Her next challenge? Beelining to Mongolia! Covering between 60 and 80 miles a day, she expects to ride through 18 countries to make it across Europe and most of the Silk Road in around six months.

Frances hopes to be able to travel through Iran but that remains dependent on a visa, so she has an alternative route that would take her across Azerbaijan and the Caspian Sea to Uzbekistan up her sleeve too. We suspect that she may take a boat across the 'sea' but we wouldn't put it past her to jump in a pedalo and cycle across either. We caught up with the Edinburgh native (turned Londoner) this week to find out more about her 15,000km journey. 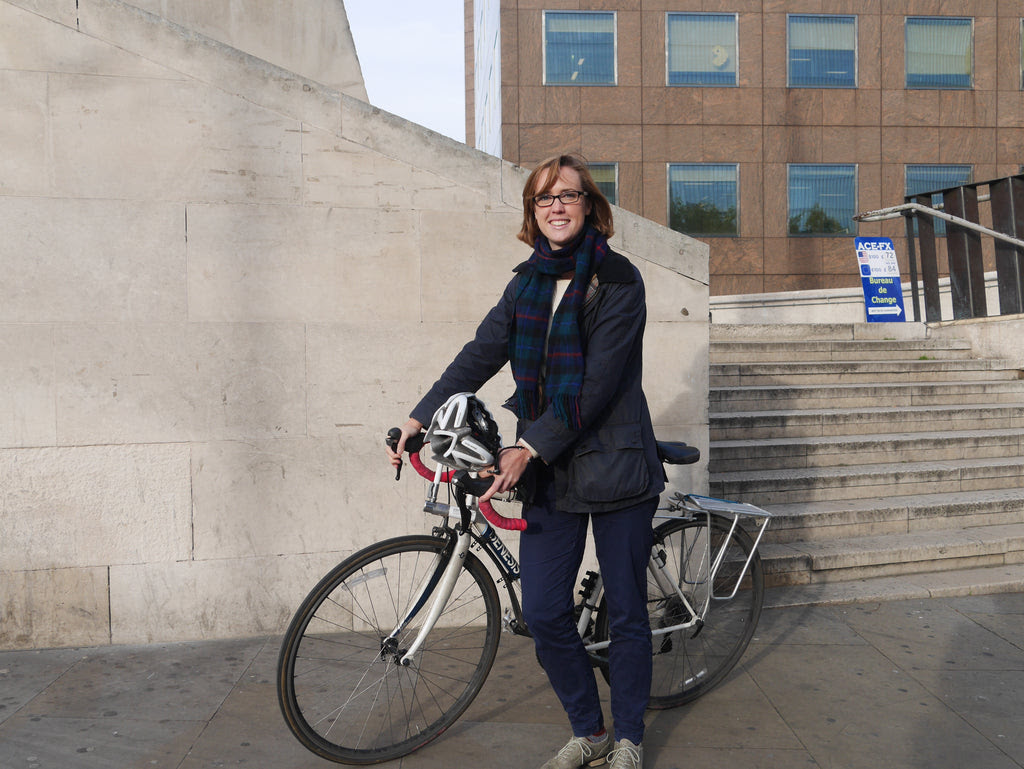 Frances and her bike (not Penelope) at London Bridge

Of course, the burning question...why Mongolia? 'Well, it's a running joke among my friends that I don't know where the Gobi Desert is. But I think it's in Mongolia and this would be a good way to find out'. This sounds like as good a reason as any. Let's just hope that she's right!

Why not travel by car or coach, we ask. Why bike? 'Some of the most rewarding things I've ever done have been driven by physical or mental endurance', she says. 'Trying to get to the top of a mountain, or running a long way, whatever it may be. If I can combine that with going to some amazing places which are really hard to get to I think that's fantastic.'

And that is the beauty of travelling by bike. Huge swathes of countries open to the two-wheeled explorer in ways that are simply inaccessible to petrol-powered automobiles. Frances also believes, like  Dervla Murphy, that cycling - and the battling through weather and hills and exhaustion that a long cycling trip entails - earns you the right to see such places. A blizzard catches Frances and her team in the Scottish Highlands

An accomplished mountain climber, Frances also 'really likes how humbling nature can be', and how cycling gives you a real sense of nature's dominion. 'There's only so much you can fight and you just have to embrace nature. You have to go at its pace...and not make a hole in the ozone layer either'. Part-time eco warrior Frances also has a green solution for powering her Beeline and other electronics: a dynamo on her wheel will generate electricity as she cycles and she can charge everything up via a USB port in her stem.

Frances will be setting off on a steel racing green touring bike that is being custom built for her by  Spa Cycles in Harrogate. She's using a Beeline to navigate. 'It's just so simple'. She had a look at several other options but she 'just wants to head in the right direction and that's enough. And that's what a Beeline does perfectly'.

As for food, Frances will be sampling the local delicacies and will probably eat a lot of noodles which she will cook with her mini kitchen! The key will be to optimise the calorie to weight ratio: 'the more I carry the less fun I'm having. Carrying a watermelon is a really bad idea'. With that in mind, she'll be keeping her panniers loaded with dried fruit and Kendal Mint Cake. Getting some camping cooking practice in

Along the way she'll be sleeping in her very cosy tent, which can stand on its own on snow and sand, and everything in between. In cities, she'll stay in hostels, and hopes to have a few friendly people host her in their homes. If any Beeliner would be up for hosting Frances between here and Mongolia get in touch!

Finally, Frances is not heading to a deserted tropical island but she will make several desert crossings, which are perhaps similarly remote. We thought that we'd go 'Desert [Island] Discs' on her and ask, if she were to take just eight songs, one book, and one luxury item on her trip what would she choose?

Man I Feel Like a Woman! - Shania Twain because she's just quite badass sometimes. And does this song have a hidden feminist meaning?

Livin' On a Prayer - Bon Jovi , which is pretty apt for this situation

Ray Charles - Shake Your Tail Feather,  a ridiculous song with no point to it, but Frances spent a happy evening trying to get her 6 month old godson to dance to before he could even crawl.  Jolly memories to keep her going through lonely deserts

Double Violin Concerto - Bach, a truly beautiful, peaceful, inspiring piece of music which Frances spent a happy summer learning with a friend and which she could listen to endlessly

500 Miles - The Proclaimers, it’s Edinburgh’s own ode to long distance travellers and can drive a room of Scottish folk into a frenzy

The Eagles – Take it Easy, which she plays with her rock covers band. “Don't let the sound of your own wheels drive you crazy” - Amen.

Queen – Don’t Stop Me Now, a good metaphor for life!  And Frances has an entire dance routine to go with it (for another time!)

Nina Simone - Feeling Good, an earthy song about a new dawn and a new day and the nature around you joining in your good mood

Dervla Murphy's 'Full Tilt: Ireland to India with a Bicycle'

Frances wouldn't want to read this book a hundred times, but this book was a massive inspiration for the trip and it only seems fitting to take it along. At 30 years old, in the 60s, Dervla set off for India with an indomitable spirit and a pistol in her back pocket.

Frances is trying to keep the weight that she carries down to 20 kilos, so even a second pair of trousers is a luxury! For a real luxury though, it would probably be a gadget. Marco Polo didn’t need Bon Jovi to get him across the desert, so should she do without also? But Frances will take her iPod. How else will she perform her 'Don't Stop Me Now' dance routine for the camels? And one last question...if she had to choose between cycling everywhere she ever went or not cycling anywhere ever again, what would she go for? 'Cycling everywhere. Of course'. We'll have to ask her again on her return.

Frances is setting off at the end of January. What will she miss the most about home? Proper cheese and Father Ted repeats.

We'll be keeping you all updated about Frances' adventure over the coming months. Join our mailing list to stay in the loop!